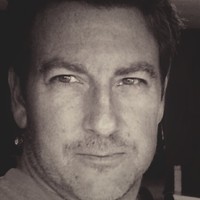 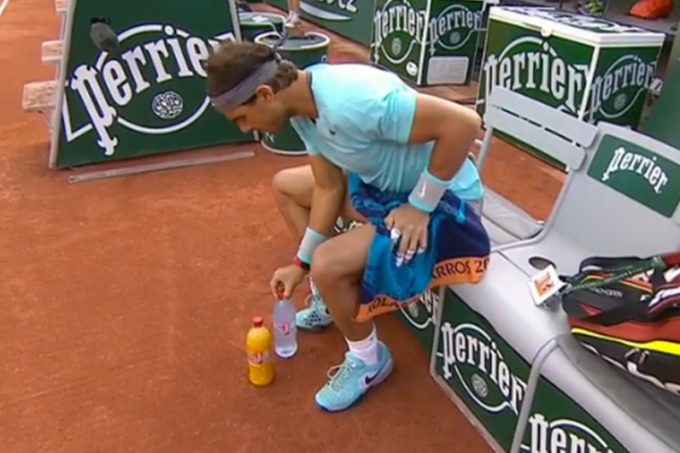 Many athletes have pre-game routines that are either product of habit, superstition or combination of both.

You’ve seen Lebron James throw chalk into the air before every game. Nobody pumped up a crowd and his teammates like Ray Lewis. Before games, the Ravens linebacker would clap his hands, slap his chest, and exhort his team to win, while shouting inspirational phrases.

And did you know Michael Jordan wore baggy shorts not as a fashion statement but so he could wear another pair of shorts underneath? The ones he wore when he hit the game-winner for North Carolina in the 1982 NCAA championship game over Georgetown? He wore them underneath his Bulls shorts in every game.

You’ve seen these quirky athlete routines over the years; however, it is unlikely any athlete has reached the level of fanatical devotion to these routines that Rafael Nadal has. For Nadal, most of these routines have crossed over from quirky to religious devotion.

I put the two bottles down at my feet, in front of my chair to my left, one neatly behind the other, diagonally aimed at the court.

Nadal’s skeptics chalk up his rituals to superstition or stall tactics used to disarm or frustrate his opponents. But Nadal has a simpler explanation. “Some call it superstition, but it’s not. If it were superstition, why would I keep doing the same thing over and over whether I win or lose? It’s a way of placing myself in a match, ordering my surroundings to match the order I seek in my head.”

There it is! Nadal’s rituals help him to create order out of disorder. In other words, they help him focus and prevent distraction from the goal.

Before you scoff, you should know science backs up the benefits of rituals, and research supports the edge rituals like Nadal’s can give. Recent research suggests that rituals may be more rational than they appear. Why? Because even simple routines can be extremely effective.

Rituals performed after experiencing losses – like a loved one – do alleviate grief, and rituals performed before high-pressure tasks – like playing a championship match – do in fact reduce anxiety and increase people’s confidence. Gino, Francesca; Norton, Michael I, “Why Rituals Work” (May 14, 2013), https://www.scientificamerican.com.

Research in sport psychology has backed up the benefits of pre-performance routines, from improving attention and execution to increasing emotional stability and confidence.

What can you learn from these athletes in your capital raising efforts? Why are rituals important in raising capital?

For one, just like Nadal, rituals will help you to keep focused and prevent you from losing your edge to your opponent.

More often than I’d like and despite my advice on preparation, I’ve seen one client after another go into meetings blind with potential investors, without any preparations, routine or ritual because they assume a prospect is already sold and all they need to do is show up to seal the deal. The prospect is in the can, right? Wrong.

Without routines or rituals, things do not always go as planned with these unprepared clients. Assuming the sale is already made in these situations and relying on your assumption alone, places you in a position of inferiority. The prospect quickly gains control and dominates the meeting and eventually calls the shots.

If you lose control, lack confidence, misread the prospect’s level of interest, or if you are distracted, it is not likely you will close the deal. And even if you close the deal, getting off on the wrong foot with a prospect like this will create headaches throughout the life of the investment since you will never be in control.

Like Nadal, to stay in control, you just need to do what you do and not give a damn what your opponent/prospect thinks.

Here are some questions to ask yourself to help you develop some winning rituals:

Though a bit eccentric, you can’t argue with the methods of Rafael Nadal, winner of 17 Grand Slam singles titles, the second most in history for a male player. You don’t have to go to Nadal’s extremes, but there is definite value to routines and rituals.

Start thinking of yourself as a capital raising athlete. The prize is prosperity, and that prosperity can start with little routines and rituals that can give you just the slightest edge to help you accomplish your goals.

Start establishing routines and rituals before calls, during meetings, and in your negotiations and watch your success rate increase dramatically.